The evening of the day I wrote my last post, my uncle's mom suddenly died. My dad's mom died in the seventies, so she was a grandmother for me and I loved her. I couldn't go to the funeral because I'm still too weak. My aunt came back from Sicily, where she was supposed to spend a month, just in time, because I got worse. An oncologist visitied me at home and gave me drops for my left lung, and I'm trying to eat more. On wednesday Tati will come visit, and on friday I'll start a new chemo.

My hair is slowly growing back in funny soft tufts. It's cute to touch. Speaking of, Sakura spends all her time in bed with me, guarding my every movement.

It's been a very long month, can't wait for september!

News! The pet scan went well, and the visit too. They suspended the chemo, those pills, because the side effects were too hard on my body. It's the second day of it, and I already feel better. Plus no more barfing! Next week they'll decide if starting another cycle or doing something different. I'm hoping for something different, to be honest. Other than that, we're having a heatwave, and Sakura is suffering from it too. My aunt's house doesn't have air conditioning, so it's really hard to endure. She spends her days sleeping under the table where the tiles are cold.

Today I was alone all day, so I watched cartoons, played on my phone, and then watched my favourite tv programme ("Cook and Live" or "Il Mondo In Tavola" on Marcopolo) while eating tomatoes. I don't have an appetite back, but it still felt better than usual. I can't wait to feel hungry again!

Sidenote, I allways read all your posts, just find it hard to write. ^^" 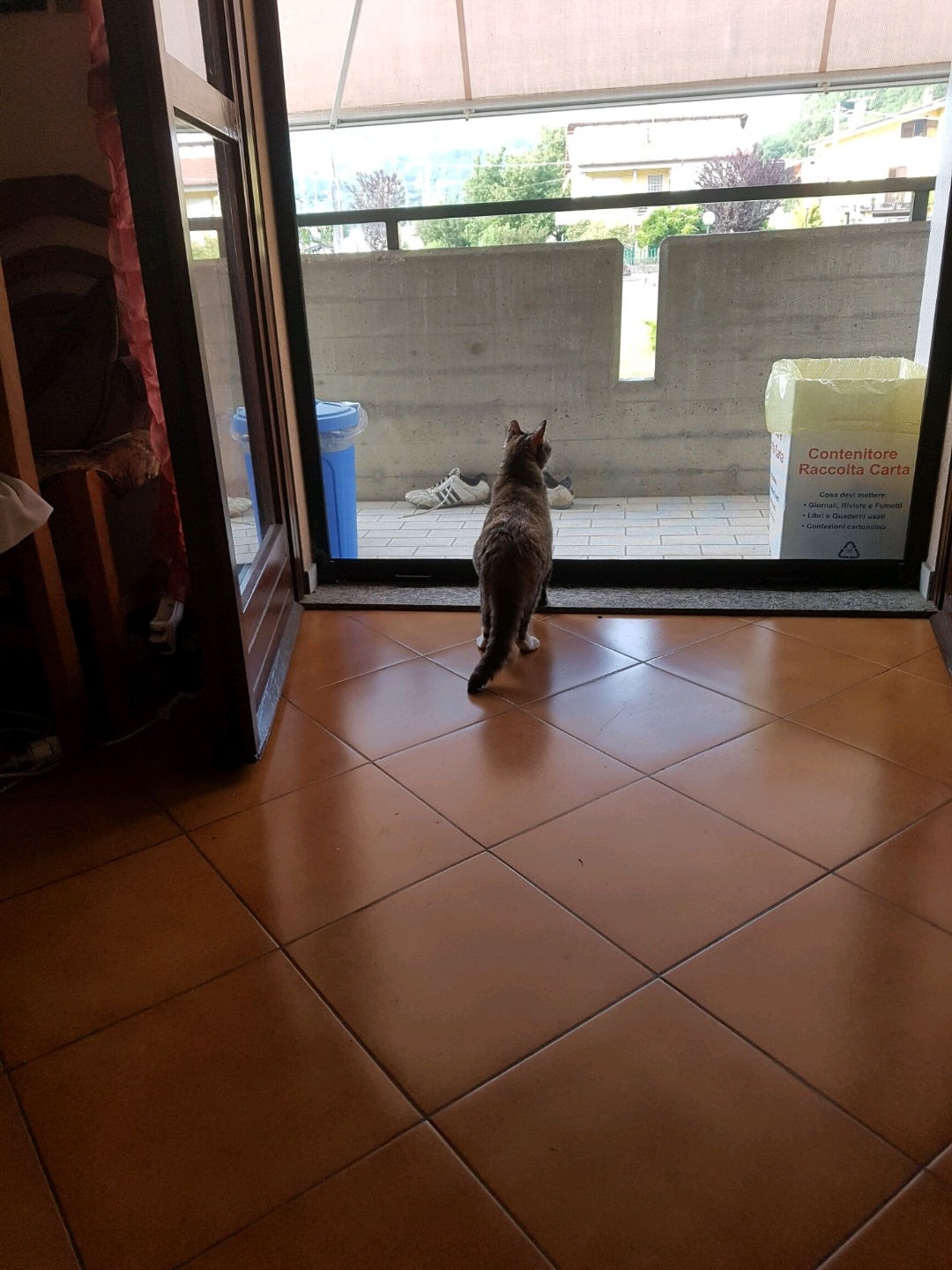 She just waltzed in this morning! She is perfectly fine, just a bit hungry. And pissed we blocked her way out. Girl, it's been four days, you can spend one inside.

So I've got bad news. Two weeks after being here Sakura disappeared. She was in the garden, and then we couldn't find her anymore. It's been three days now, and my aunt thinks she's dead. We've posted pictures, we've asked everyone, we've walked the whole neighbourhood, she's just disappeared. My aunt thinks she's dead, my therapist thinks someone took her. I don't know what to think, especially because I started the fourth cycle of chemo and it hit me hard, so I have to focus on that. Next week I have the pet scan, then they'll decide how many more cycles I have to do. I hope not many, because those meds give a lot of side effects, even if I see the good effects too.

All in all, it's been a bad week. Let's hope the next one is better. 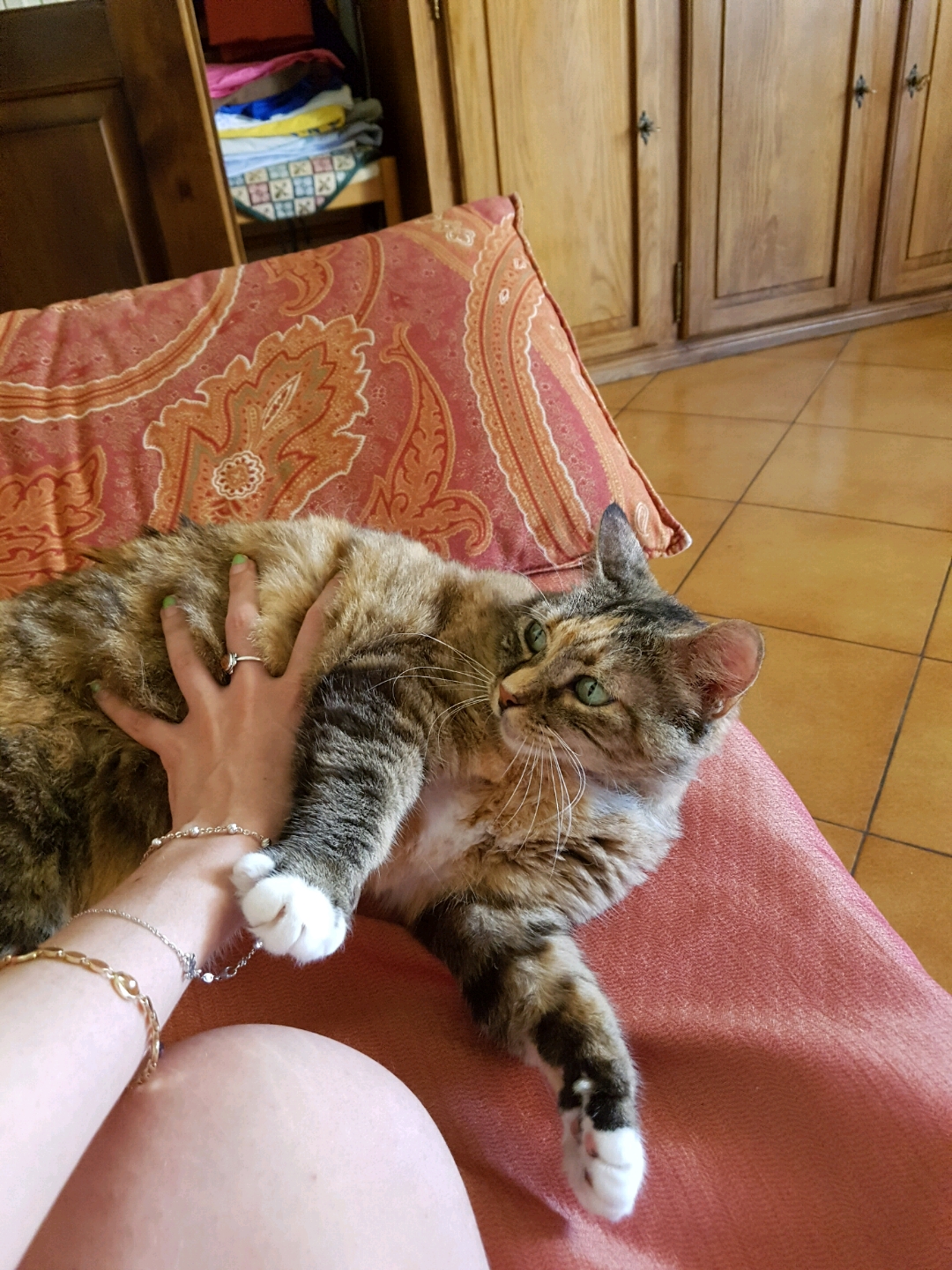 She arrived on tuesday, she already feels at home. Everyone loves her, even if she peed on the couch less than twelve hours in. :)

The good news is, the chemo goes perfectly, so I just started the third month of it. I saw my oncologist and she was very happy with my progress but she also apologized for the side effects that can be a bit nauseating. Other than that, I spent 13 hours in a ER on saturday (had to go there by ambulance, which was super scary) because of a ferocious panic attack. Thank you, stupid body. They did all kinds of exams and then sent me home at 1 am. The day after that the friend of mine who keeps Sakura when I'm here sent me a video of Sakura purring. I started crying, my aunt hugged me and told me she was contacting my friend to bring Sakura here and we were all going to get used to a pet in the house. I almost lost it again! I'm officially a Piedmont citizen now!

So then Francesca ordered a bunch of stuff online, blankets and toys and most Simon's Cat branded, and my uncle put nests all over the balcony, all while telling the neighbours' cat the fun is over. That's because she loved walking inside our bedrooms through the windows and hiding under the beds. There's a new Queen in town, kitty!

I also have a new therapist while I'm here, I'm going to meet her next friday. Let's cross fingers! It was my therapist's idea, she says I need someone to talk to here too. I'm not saying she's wrong, it's just scary.

So that's it for me, Sakura is coming in three days! \o/

More news! First, the antidepressants I'm taking are working: they're meant to start showing the effects after a month, and this week, right on time, I started feeling looser and more relaxed. I finally found a therapist here (my therapist is all the way back in Venice) and I got an appointment for next week.
I met a new oncologist last week (well, new to me) and I love her. She explained every little side effect to me, gave me a new anti-nausea medicine, and then we even had a little conversation about Venice. The side effects are still very weak, and that new medicine is really helping with the nausea.
We have some land in the country, 15 minutes from our house, where my uncle grows vegetables and keeps seven chickens, with fresh air and deers walking by. Everyday I try to spend at least one hour there, sitting under the cherry tree while my uncle works. My aunt has started accompanying me, and she's really enjoying how relaxing it is. Although it can also be scary! The other day we were picking currant (so delicious) when she moved a plastic bottle that was standing on a old metal pole by the currant bushes. Problem was, the bottle cotained a wasp nest, and she only managed to scream at me to run away before she got bit. I got really scared and then washed the bite with water from my plastic bottle. Then my uncle arrived and got a bucket of ice-cold water from the well and after washing her arm in it she finally felt better. I splashed along enjoying how cold the water was. Then yesterday my cousin Marco came armed with anti-wasp poison and killed all three nests (yes, there were three of them).
What else? My sight is still weird, so I'm not reading much. I'm watching cartoons, listening to music, spending time with my aunt, helping Francesca with her graduation thesis. I'm trying to be calm and relaxed. And stay away from wasps. ^^

A new month starts, with good news all around! Yesterday I had the first check-up after I started the new chemo, and it went brilliantly. The side effects are so bland I sometimes have a hard time differentiating them from normal stuff, and most of the time I don't have them at all. The doctor doing the check-up was the same one who, when I had brain metastasis and was in awful pain, told me on the phone that it was the flu, to take paracetamol and stop calling (without telling my oncologist I had called), and boy, my oncologist must have screamed at her a lot because of that, because she was extra sheepish. When she asked me on which day I had started radiotherapy, Francesca told her off for not remembering, since "she should know when Valentina had to be admitted into the ER". It was glorious. :D I'm really bad at telling people off, but thankfully Francesca, my aunt and Tati are great at it.

So today I started the second cycle, and as usual the only bad aspect of it is that the pills are really sour and I have to eat a small piece of chocolate afterwards. Woe is me. :D

In other news, I just bought the Steven Universe soundtrack and it is glorious!!! The audio quality is incredible, and it's really hard not to sing along, but I'm sitting right next to Francesca who's working on her thesis, so I must restrain myself.

And two days ago I got a care package from

space_oddity_75 in the mail, full of things I love, it was amazing! There was a lot of squealing and impromptu dancing. :D

A lot of things happened these last few days! On the 12th I had a visit with my oncologist, who gave me a new chemo to do, and this time it's pills. I have to take them everyday until the next visit, June 1st, and if everything's going smoothly we'll do three cycles and then the pet scan and see if it's working like it should. Then they'll decide how many months it has to last. The first turn is always the nerve-wrecking one because it's the one where you learn how the side effects work on your specific body, and which days are the bad ones. We're all watching me like hawks. So far I only got a bit of one side effect, the irritated mouth. Except it was only the tip of my tongue, as if I had drunk hot tea and scalded it, and today it was already over. I took notes and then played Radiohead on my ukulele to celebrate. ^^

I've been walking a lot everyday to build my strength back. I say "a lot" by my standards, where walking uphill for ten minutes is huge progress, but hey, I couldn't even walk last month! These muscles are soft and useless. The other good news is, I've gained weight! I was 48 kilos when I had those two days of coma, and now I'm 56 and counting! My goal is 60, crossing fingers my body wants to cooperate. I even ate a McDonalds whole meal last week!

And next friday Francesca's boyfriend is coming to visit, I can't wait! We get along splendidly, and I really love the idea of a friend coming to visit! \o/

Look, a proper entry from my pc and not from my cellphone! The eyesight is still funky, so sorry in advance for any weird spelling. They said it takes time to get better. Anyway, here's what I've been doing these last few days: walking in the sun with my cousin, I went to the pharmacy to buy a soap and a new cream, I did my first cortisol shot with a super sweet doctor who moved here from Africa 30 years ago (we live in a very small town in the mountains of Piedmont, believe me when I say we were not expecting a doctor who came from anywhere but Northern Italy). I'm eating a lot, and everything's so delicious and I missed my aunt's cooking so much. I'm re-wathing all Studio Ghibli films, and I even made my own breakfast yesterday! I was a bit worried to use the stove, with the eyesight and everything, but I did it and boy, it was even more delicious because I did it all by myself. ^^

So yep, these antidepressants are really working. I was a bit worried they'd make me sleepy, but so far they just make me feel at ease and... normal. Just myself.